Blues through after penalties in Senior Cup 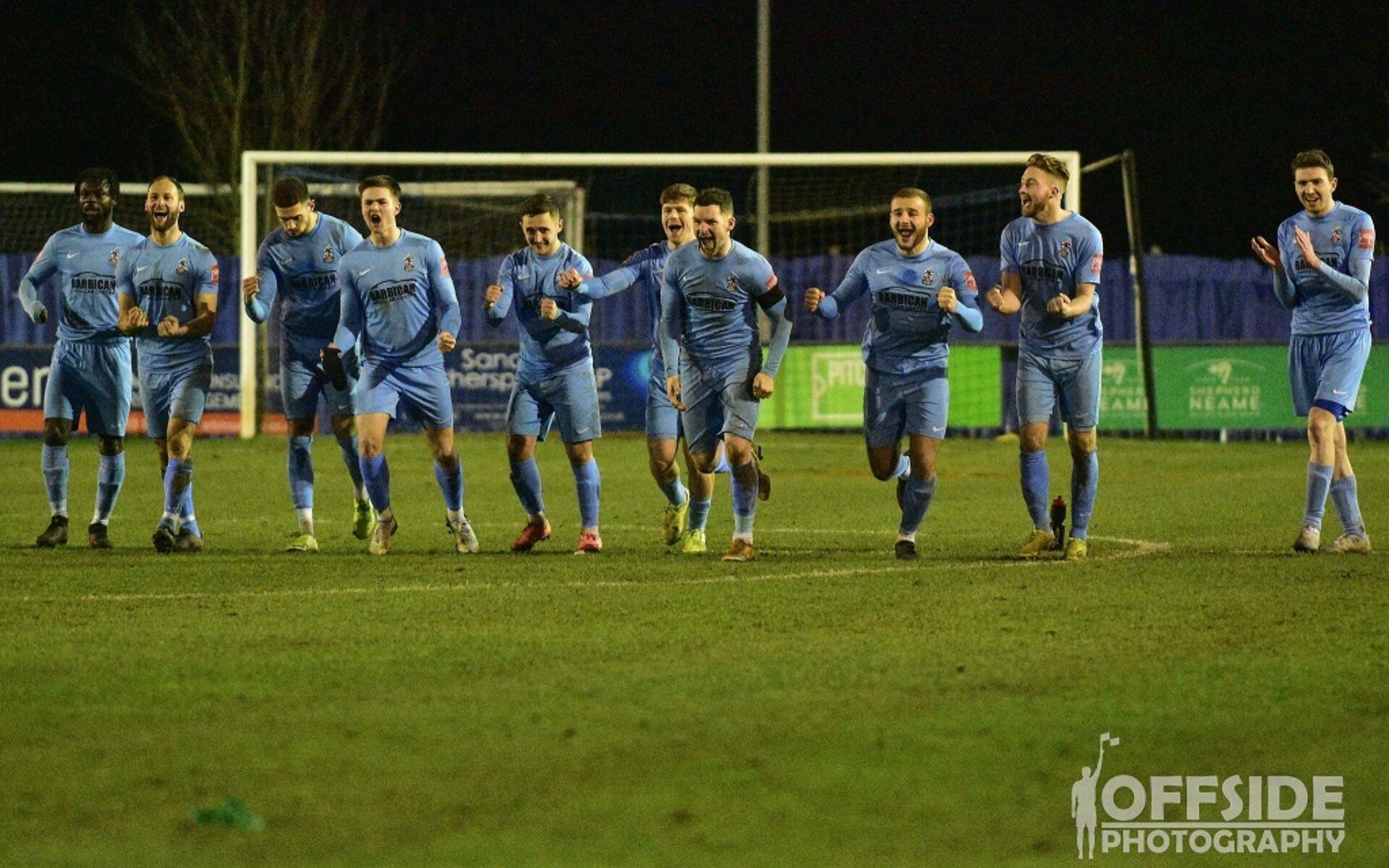 The Blues looked to have sealed a spot in the quarter-finals of the Essex Senior Cup until Tilbury scored an injury time equaliser. It was Carlos Simeon’s penalty shootout heroics that saw Brentwood through in the end.

Brentwood started brightly and the first opportunity of the game came along in the 3rd minute. The referee called play back for a free kick and Freddie Gard saw his attempt fly a few inches over Tilbury’s goal.

The game was always very much in the balance and the visitors had their first attempt on 12 minutes. What was initially a wayward attempt from Remi Nelson from outside the box ended up falling kindly to teammate Charlie Kendall, who shot narrowly wide of the post.

Just over halfway through the first half Josh Gray found himself in a bit of space outside of the box and decided to have a go at goal – it was a good attempt and he was unlucky not to hit the target.

Tilbury looked to break down the right wing a couple of times in the first half and looked dangerous when doing so, but their final ball failed them on both occasions. Carlos Simeon then held well from number 9 Roman Campbell’s first attempt of the evening on 37 minutes.

Just before the break Town had the chance of the half – Dan Ogunleye played Tom Richardson through in the box and his effort on goal was cleared well off the line by the visitors.

Brentwood again went close in the 54th minute. Ashley Nzala and Ogunleye combined well, and the latter drilled a good ball into the box, with Nzala just inches away from tapping in the cross.

Nine minutes later Brentwood were given the chance to end their frustration in front of goal when the referee awarded a penalty. Andy Freeman was subbed on at the hour mark and almost made an instant impact, hitting the post after a good ball across goal – the referee then pointed to the spot after he judged that the Tilbury defender had pulled Richardson down in the build up. Richardson dusted himself down and slotted a great penalty into the middle of the goal, with Girling diving to his right.

The goal led to a bit of a reaction from Tilbury, and they had the better of the chances as the game reached its latter stages. Remi Nelson headed just wide from a Tilbury corner on 74 minutes and Roman Campbell again had an attempt at goal but could only glance his header into Simeon’s gloves.

Brentwood were punished very late on after failing to clear their lines properly. The ball fell kindly to Chris Millar outside the box where he still had a lot to do – he drilled an effort low into the bottom right of Simeon’s net and it was back level in the 91st minute. A very late blow.

With no extra time to be played it would be penalties that would decide the tie. Tilbury stepped up first and scored and it was soon 3-3 after 6 faultless penalties. Carlos Simeon was the man for the occasion, and he went on to save Tilbury’s final 2 penalties – an excellent performance from the new signing. Freeman had scored Brentwood’s 4th penalty and so the shootout ended 4-3 with Brentwood not needing to take the final penalty.

It wasn’t made easy in the end, but it was a great result which sees the Blues into the quarter-finals where they will face Coggeshall Town.