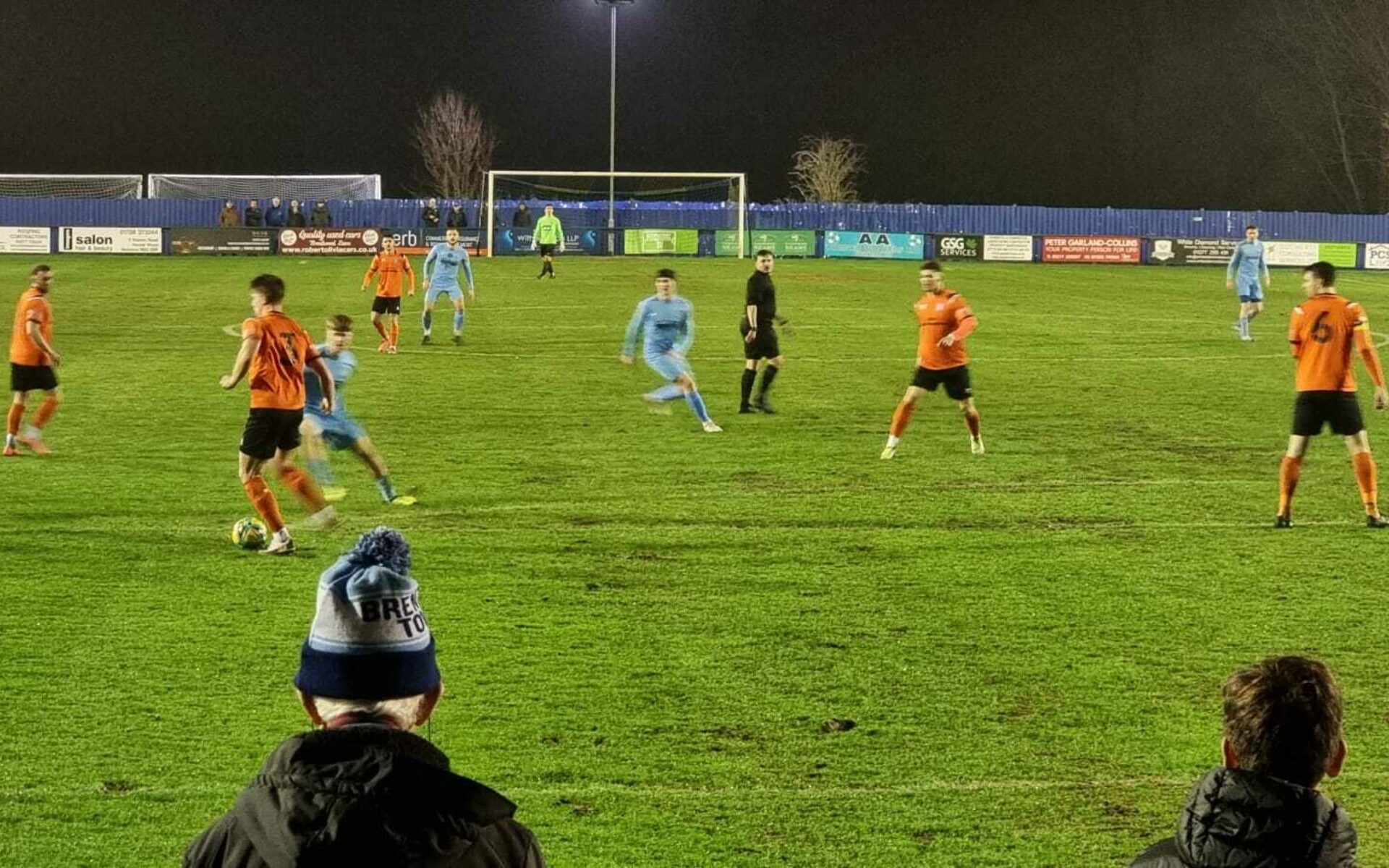 It was a lively affair at the Arena on Tuesday night and a case of what could have been for Brentwood. The game managed to not fall victim to the weather - it was instead a floodlight failure that called the game to a halt in the 26th minute, ultimately resulting in the game being abandoned.

Despite its premature ending, the match had a bit of everything, and we looked set to be in for a real corker of a game. Tom Richardson ran onto a ball over the top in the opening 25 seconds and looked to have got the better of his man, before being pulled down by the Bury defender. The ref was left with a tricky decision, given how early on in the game it was, Joe Hood was Bury’s last man and there was little doubt that he had denied a goal scoring opportunity. The man in charge made the call and sent Hood for an extremely early bath. Town weren’t far off from the resulting free kick, seeing it float just over the bar.

The Blues wasted no time in upping the pressure on the visitors and Ash Nzala saw an effort at goal saved in the 4th minute. There was a bit of a scramble in the box in the aftermath and Richardson went down claiming a foul, but the referee wasn’t interested, and the spell ended in a free kick to Bury.

Connor Hogan was cautioned by the ref on the 11th minute, with a Bury player down clutching his ankle. Bury seemed to feel hard done by, but the referee ignored any pressure to level things up in the match.

Just a minute later and Nzala was on the scoresheet, continuing his fine run of form. A defensive header from Bury failed to clear the lines and fell to Brentwood’s number 11, but he still had plenty to do. He caught the ball sweetly on the volley and beat Blair Samuel down low to the left of his goal.

To Bury’s credit their heads didn’t drop and they did well to stay in the game. In the 19th minute Ramadan had a scuffed effort saved by Bowles, after some good build up play and what looked to be a dangerous attack for the visitors.

It wasn’t long until there was a lifeline for Bury. Hogan saw a second yellow from the referee and was sent his marching orders for a foul on 23 minutes.

The action was relentless and just a minute later Josh Gray had a great effort from about 25 yards tipped over by Samuel. The resulting corner ended in a bit of a scramble, with Brentwood going close and seeing an effort blocked for a second corner. Richardson rose well to the cross and headed inches wide, with some in the ground thinking he had scored.

On the 26th minute 2 of the ground’s floodlights went out and the referee decided it was best to call the game to a halt. Unfortunately, despite the clubs best attempts the issue couldn’t be resolved and it was decided that the match would have regrettably to be abandoned. An unfortunate end to the start of a breath-taking game.