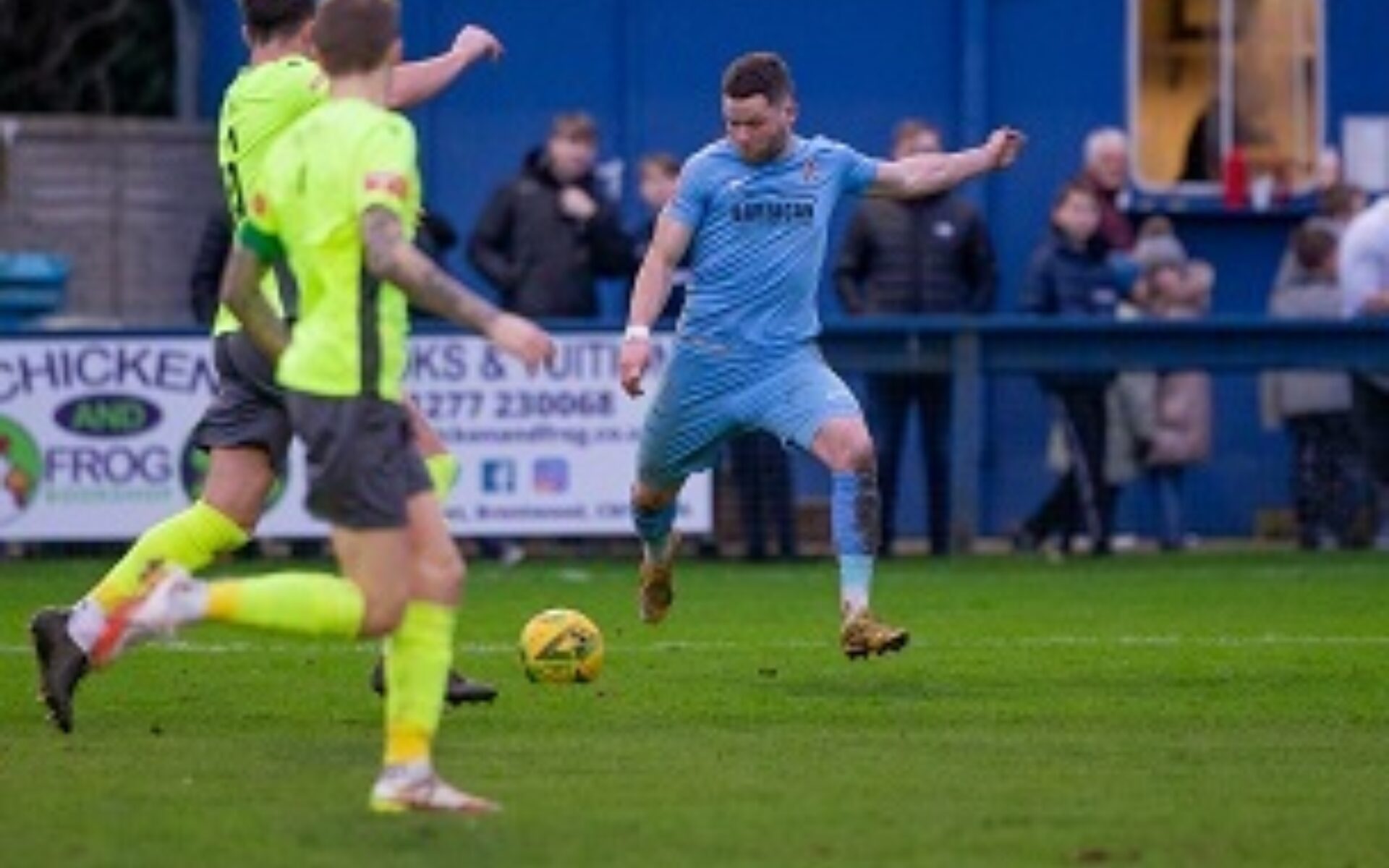 The Blues made it 2 wins from 2 in the New Year. A well taken first half goal from Tom Richardson, coupled with some good build up play and a great all-round performance from Ashley Nzala, helped to guide Brentwood up to 7th in the table.

There was little to report in the early stages of the game, but it appeared evident that Grays game plan was to get the ball up to their giant number 9 Anointed Chukwu as often as they could. The forward made a nuisance of himself all afternoon but failed to see much fall to him in front of goal.

Brentwood’s first couple of half chances soon arrived. In the 13th minute the in-form Ashley Nzala forced his way past a couple of defenders, but couldn’t hit the target from a pretty tight angle. A few minutes later and it was George Craddock’s turn to have a chance at goal. Some good work from Haziz Kone to beat his man and get a ball in to the box which the Grays defenders struggled to get rid of, Craddock saw the ball fall to him, but he could only blaze over from the edge of the box.

Nzala was a constant thorn in Grays side, but defender Geofrey Okonkwo did well to keep him relatively quiet for most of the first half.

The first and only goal of the game came for the Blues in the 39th minute. A great ball down the left flank from Nzala set Tom Richardson free and he showed excellent pace to get a good angle on goal and convert his chance. The visitors’ keeper Danny Sambridge could do little to stop the shot, with Richardson slotting the ball low past him and into the back of the net.

Grays were very limited for opportunities in front of goal, despite remaining competitive in the game. Their first good chance didn’t arrive until the 42nd minute. Some tricky footwork from Kai Brown on the left wing saw him beat his man and get a good shot off on goal. Ollie Bowles saved well and deserved credit for staying alert after seeing little action for most of the first half.

Into the second half and Brentwood continued to have the better of the chances. A half chance from Kone in the 47th minute was saved easily by Sambridge. Nzala had a good opportunity in the 51st minute, running onto the ball in the box, but failed to convert after pressure from the outrushing keeper.

The Blues remained the dominant side and the chance of the half came in the 73rd minute. Nzala and Richardson teamed up yet again, with the latter seeing a great half volley saved well by Sambridge.

A few minutes later Nzala capitalised on a poor diagonal from Grays. He picked up the ball near the halfway line and beat his man, but could only shoot wide of goal in the end. A very lively performance from him.

The visitors were no pushover, but failed to really assert any pressure in the closing minutes and Brentwood were able to see out the game and continue their impressive start to 2022. Long may it continue!