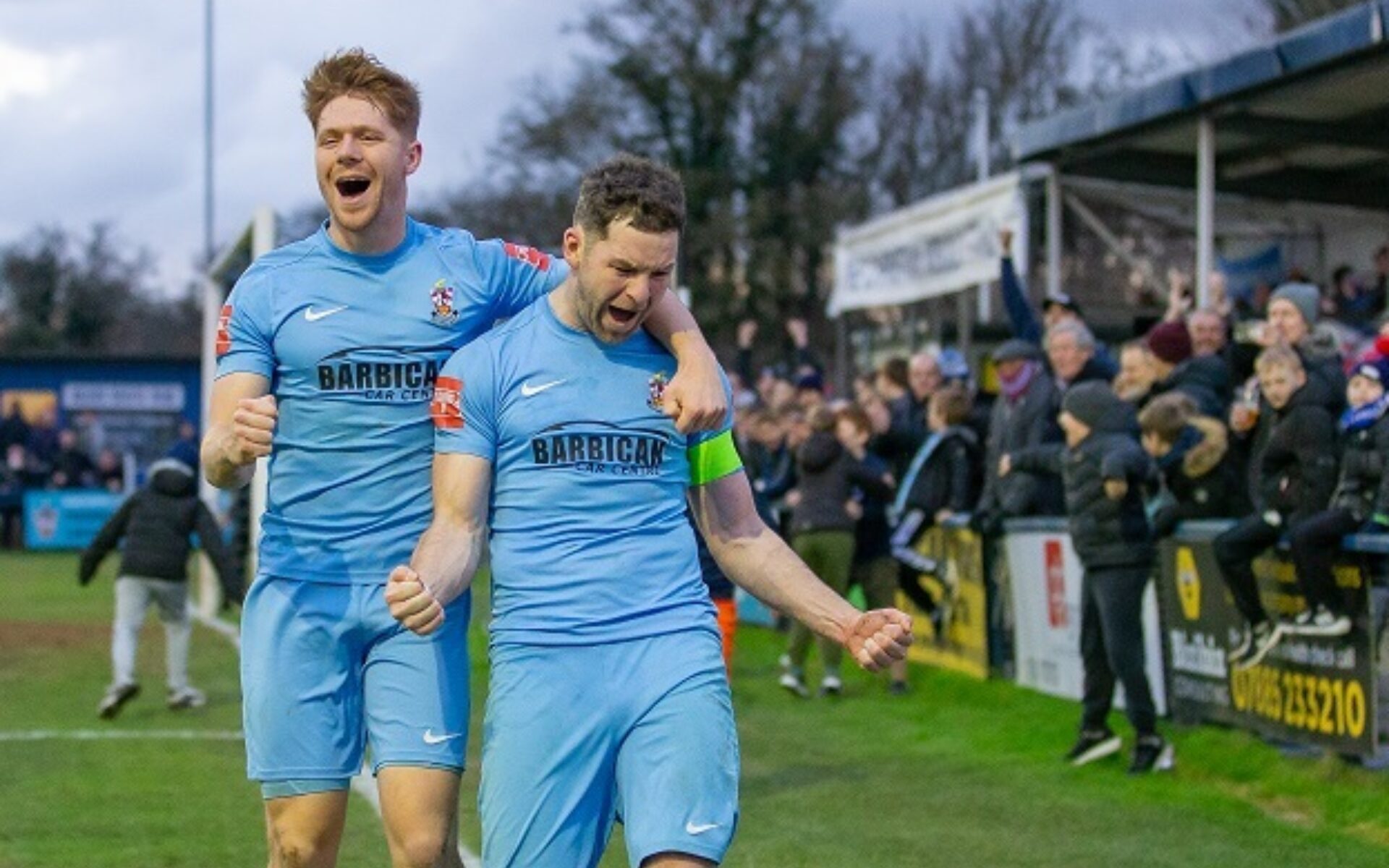 The Blues made a huge step towards the play-off places on Saturday afternoon, in what was a massive game for both sides. Two late goals – another from the spot for Tom Richardson and a cool finish from Rob Harvey sealed the three points for Brentwood.

The match started in a lively fashion with both sides going close in the opening 5 minutes, the visitors doing so first with 4 on the clock. Evans Kouassi swung a cross back post, which was met well by Matthew Price, but his shot across goal was cleared superbly off the line by James Love.

Just moments later it was Brentwood’s turn to attack, when a good ball to Rob Harvey found him in behind and lining up an effort on goal. The visitors’ keeper Bobby Mason did well to come off his line quickly and prevented Harvey from having a clear shot on goal, with the resulting rebound going out for a corner.

The match looked poised to be a thriller but after that flurry of action both teams seemed to settle down a little. Both sides looked comfortable on the ball but there wasn’t much to report in front of goal and the wind made things a little more difficult. Evans Kouassi always looked lively though, constantly causing Town defenders problems with his tricky footwork and fast breakaways, but nothing materialised for Canvey.

Into the second half and Ashley Nzala had a good chance after 54 minutes. A good through ball found the winger who tussled with Sampayo for the ball, with Sampayo eventually falling to the ground and Nzala bearing down on goal. Canvey had Mason in goal to thank again, as he was quick off his line again and saved well to his left.

Nzala came to life in the second half and really looked to trouble Sampayo down the left hand side. It was his good work that resulted in the first goal of the game, after his cross from the left was handled by Empochontsif. Up stepped Tom Richardson again – the captain made no mistake from 12 yards and sent the keeper the wrong way. It was 1-0 with 15 left to play.

Brentwood always looked the more likely of the two after the goal and Rob Harvey wrapped things up with 5 minutes to go. A good ball in behind from Richardson found Harvey in loads of space and the number 7 finished superbly across the goal and into the bottom left of Mason’s net.

A huge 3 points for Brentwood against top opposition and another step towards breaking into those play-off spots. The table makes for good reading at the moment with the Blues having at least 3 games in hand over all the clubs sitting above them!